On the Menu with Coach O

Join us for On the Menu with Coach O from Augustana University Football!

Coach Olszewski owns a career record of 79-50 while owning a 47-34 record in seven completed seasons at Augustana. He was named the 21st head coach in school history on Dec. 12, 2012, after five seasons as the head coach at St. Olaf in Northfield, Minnesota.

During the COVID-19 cancelled season of 2020, Olszewski oversaw a roster that produced a pair of Academic All-America honorees in Eli Weber and Luke Fritsch. In addition, T.J. Liggett earned an All-District honor from CoSIDA.

The 2019 season saw Coach Olszewski become the only coach in Augustana history to guide the Vikings to more than one playoff appearance as AU tallied a 9-3 overall record and a trip to the NCAA Playoffs. Named the NSIC Coach of the Year, the Vikings recorded an unblemished record at home while the nine wins were the second-most in program history.

He oversaw the ascension of Jake Lacina, who became Augustana?s first-ever Rimington Trophy award winner, given annually to the nation?s top center. Lacina also earned First Team All-America honors from the AFCA and Don Hansen Football Gazette along with second team honors from D2Football.com. Joining Lacina on an All-America list was sophomore Luis Guarita who earned an honorable mention on the Don Hansen squad.

The Vikings saw 12 players honored by the NSIC including four first-team selections.

Away from coaching, Olszewski was the athletic director and dean of students for the Little Chute (Wisconsin) School District (1998-99) and chief executive officer of the Mankato Family YMCA (2002-2006).

Olszewski earned his bachelor?s degree at Wisconsin-Stevens Point (1993) and a master?s degree from Minnesota State-Mankato (1995).

He earned All-Wisconsin State University Conference honors as a defensive back at Stevens Point and led the league in interceptions (1990).

He and his wife, Deana, are the parents of one son Jett, and two daughters, Jersey and J.J. 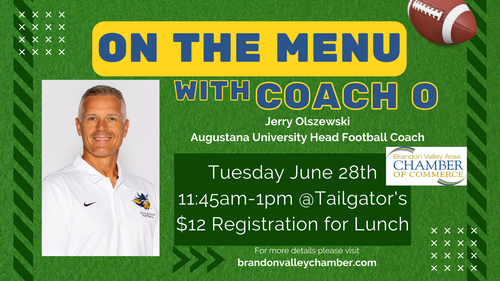